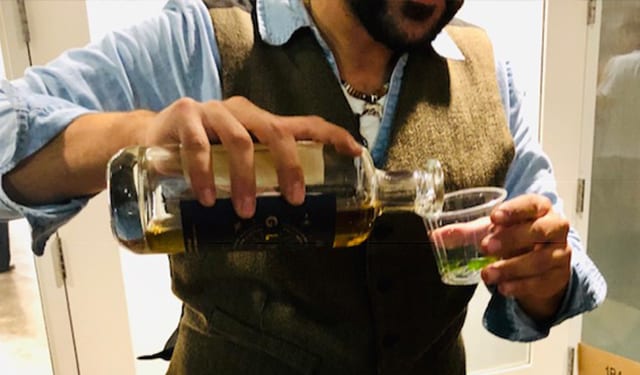 The Future Of Food Is…Sooo Delicious!

The TedX Marin Salon – The Future Of Food

What a spread!  CBD infused chocolates, scotch made in a few hours’ time, taste tablets that trick your taste buds into thinking a dessert with absolutely no sugar tastes sweet…it was so cool to attend the TedX Marin Salon focusing on “The Future Of Food!”  Nearly 700 attendees circulated around the collection of new and inventive food and beverages, and after we had each drunk just enough scotch to take off the edge, the doors opened and we were ushered into the theater where four individuals gave talks, followed by a lively 40 minute Q & A session, with the questions submitted prior to the event.

I am always looking for cool packaging and logos, and my favorite tonight was Paleo and Vegan HU Chocolates.  The HU is short for “Human”.  The chocolate is tasty!  Hu Chocolates

Good Earth founder Mark Squire talked about the difference between organic farming and non-organic farming.  Organic farming is about richness and diversity of soil, plants and creatures.  Non-organic farming is about emptying soil and space of everything but the particular seed they want to grow, and then adding chemicals to feed those seeds and kill everything else.  A bio-diverse soil and environment produces a sturdier and larger yield.  It takes ten years, he said, for a field to reach its fullest potential for growth.  He also said that having huge industrial farms is not the best way to feed a growing world population, it is really the creation of local small farms that will feed us all.

The talk was hosted by Edible Marin founder Gibson Thomas, and she asked a really good question that struck me, why is it that Organic Farmers need to pay A LOT to show that they are not using chemicals (which adds to the cost of organic foods), while the growers who ARE using chemicals do not have to show any documentation of what they are putting in our food, and pay nothing extra?  She is so right!  Why is it that farmers have to pay to say that they are NOT putting added chemicals in the food…isn’t this the opposite of labeling?

No question, the two most popular booths were the scotch and CBD infused chocolate booths which conveniently were right next to each other.  Glyph Scotch and Resonance Spa And Welnesss were an excellent pairing of booths!  Rather than age their scotch, Glyph extracts specific molecules from the yeasts of their preference to almost instantly create the flavors and taste that they are looking for.  It is Scotch Science!  I am sure that if there were Scotch police these guys would all be arrested immediately, thrown into a dungeon and forced to drink wine coolers for the rest of their lives…but they have a very cool bottle, and are excited about playing with ingredients on such a micro-level.  The CBD infused chocolates were presented by Resonance Spa, located right near me in Corte Madera.  They offer CBD infused oils for their massage…and chocolates!

Miyoko Schinner herself was at the event presenting her incredibly delicious vegan cheeses and butters.  These butters, spreads, and harder cheeses are so delicious that you seriously would not miss regular cheese if you were forced to switch.  But there was no arm twisting, this booth was crowded four people deep.  This was partially because there was not much other food and many people including myself had had a couple of samples of scotch on an empty stomach, so this delicious presentation came to my rescue.

It can’t be understated how damaging the farming of livestock is to our environment.  Not only does livestock need pasture, but vast areas of land are used to grow their food. In natural circumstances, cows don’t continuously produce milk year after year.  Like other mammals, including humans, a cow begins producing milk for the first time after their first calf is born.  A dairy farmer will immediately remove the calf from the mother and begin to harvest the milk.  If you have ever heard a mother cow wailing for her calf, you would have pause to eat dairy.  I have, yet I push it into the back of my mind.  The mourning and wailing can last for days.  During calving season, there are hundreds of wailing cows.  Cows are sentient beings who live in groups with complex social structures.  They look funny because their horns are burned off at the root with chemicals.  Yes, it is excruciating.  Anyway, back to what happens next, the cows then become milkers, and they are forced to produce milk for two or three years before they are given a break, and are sometimes given drugs to keep their milk production up.  A cow is selected to stop producing by the farmer.  The real story behind dairy cows is very heartbreaking.  I grew up around dairy farms and I witnessed all of these things, but it did not register with me as wrong, because it was so taken for granted that this is just the way it is done.   Now as an adult, I am aware of the truth, and although I love ice cream and cheeses, I can feel a shift begin to happen in my own mind.

The Future Of Food

While mingling, I spoke with a gentleman about the new exciting law that goes into effect on January 1 in California.  It extends the cottage kitchen law to include the option of people to actually serve prepared meals in their home or for pick-up or delivery.  He told me about visiting Cuba years ago, and there would be little homes that would put up holiday lights on their porch.  This meant that you could go shopping for ingredients, like vegetables and a lobster, drop them off at the home, and they would cook all day preparing a meal for you.  You would arrive at dinner time and sit down in their home, listen to music, and get to know them.  This sounds incredible!

At Future Bright we believe that buying and growing local will solve so many problems with health and our environment.  That is why we are launching a Cottage Food Directory, where you will be able to find local kitchens who can prepare your meals for pick-up, or create dining experiences for you in their home.  The possibilities are so endless!  You can have a sneak peek and sign up to be notified when we launch the directory by visiting CottageFoodDirectory.com.